History and modernity-within a stone’s throw 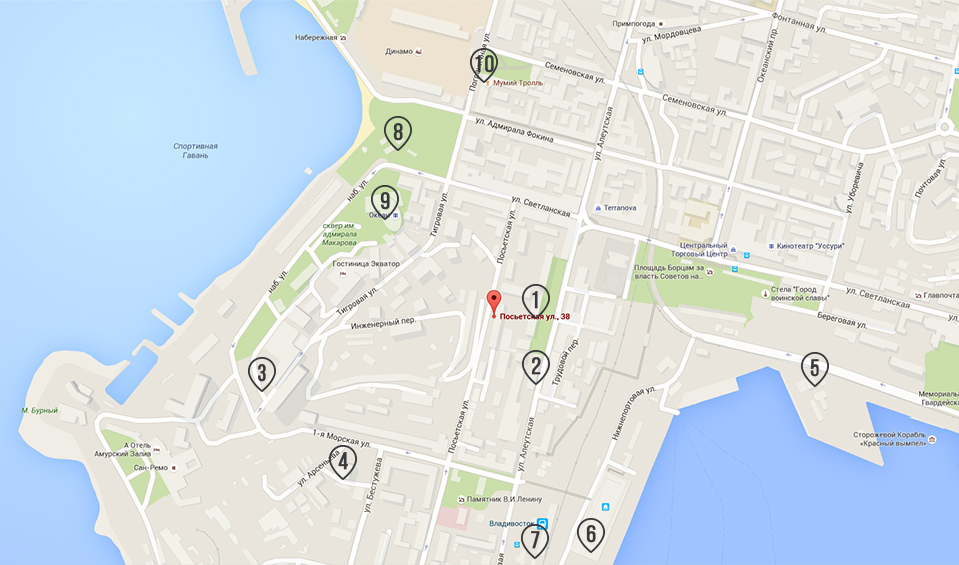 Monument of the Fighters for Soviet Power at the Far east

order to see first attraction you can look ouside your window. You will see a building with unusual name “Grey Horse”. These are well-known high-rises from Stalin’s time. You will easily understand why they were so popular at that time- the rest of the city had 3 storeys buldings while these ones had 8 storyeys with sculptures of a Red Army Man, a pilot, a farmer, and a miner on the rooftop. However, even the most knowledgable people are not able to explain why the building got its name after the horse 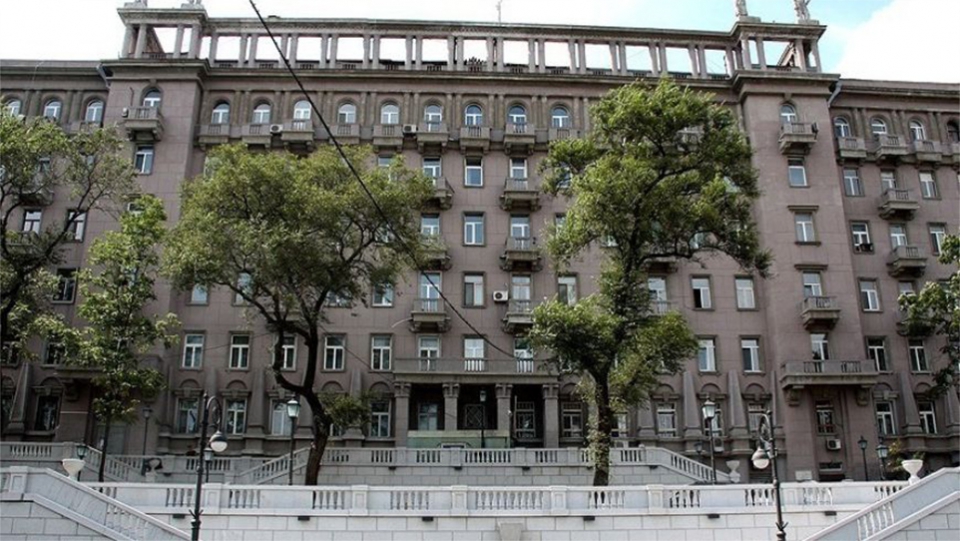 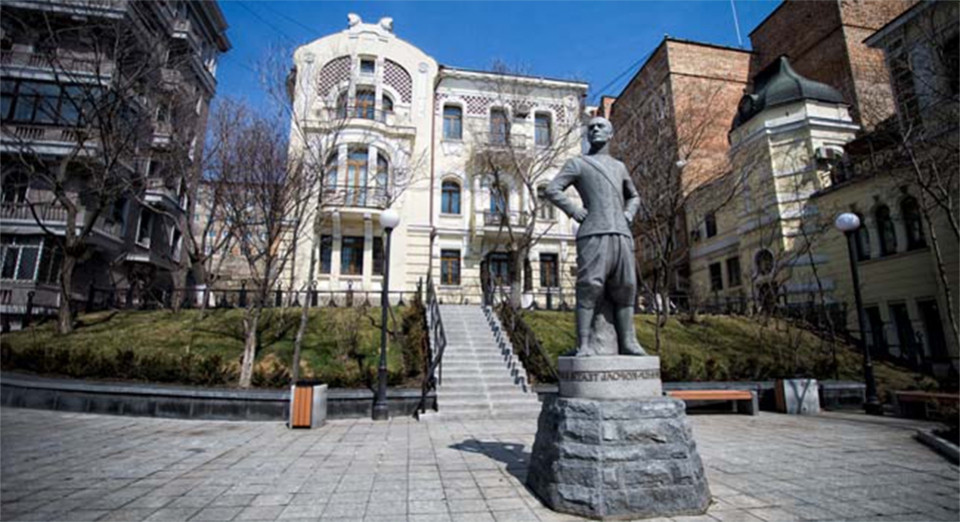 The next attraction will tell you about Rocking 40s. This is a submarine S-56, the first one in USSR to become a memorial. On the submarine you will be able to see number 14 which stantds for number of ships it was able to destroy. The submarine multiple times was considered sunken but it always came back to the port. In 1954 it came from worlds first trip around the globe. 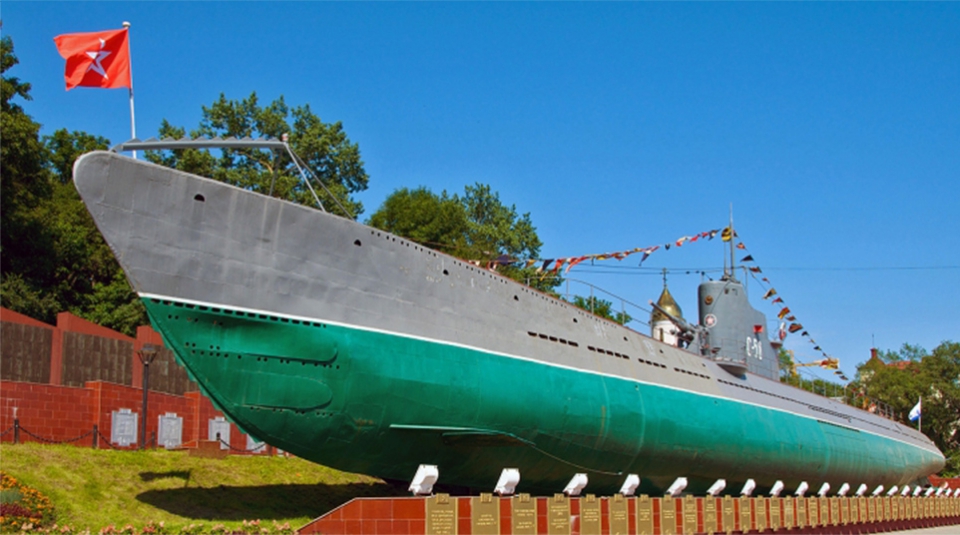 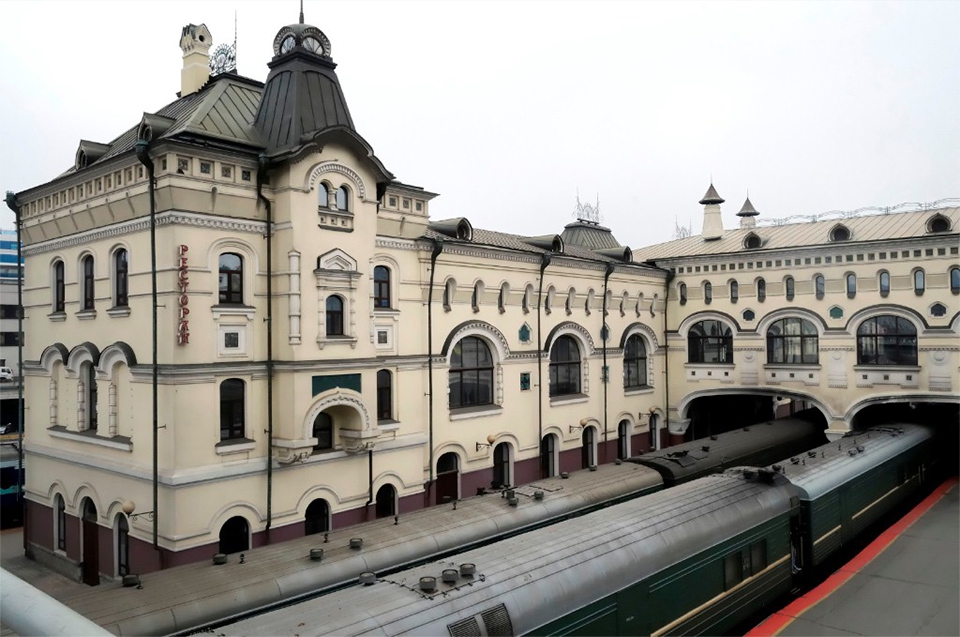 All visitors, who would like to expand their trip to suburb areas, may do so at Ferry terminal or Railway station (both located just couple of minutes away from «Seaman»). You can easily distinguish them: One looks like a ship and another one looks like famous yaroslavsky railway station in Moscow.

Lets imagine that you are not interested in history. In this case, we would recommend you to turn left when exiting the hotel. You will be able to see all the modern buildings. If you are travelling with kids, they will enjoy a little amusement park at the seawall 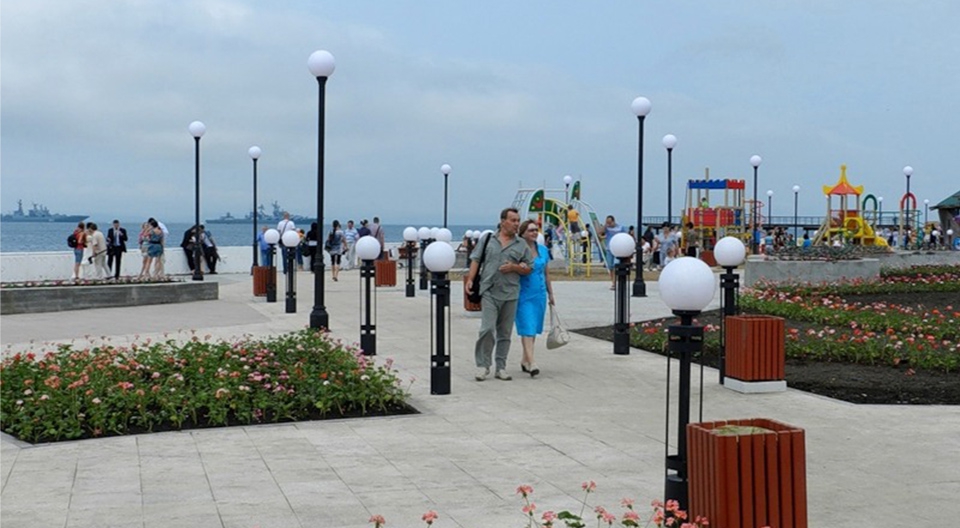 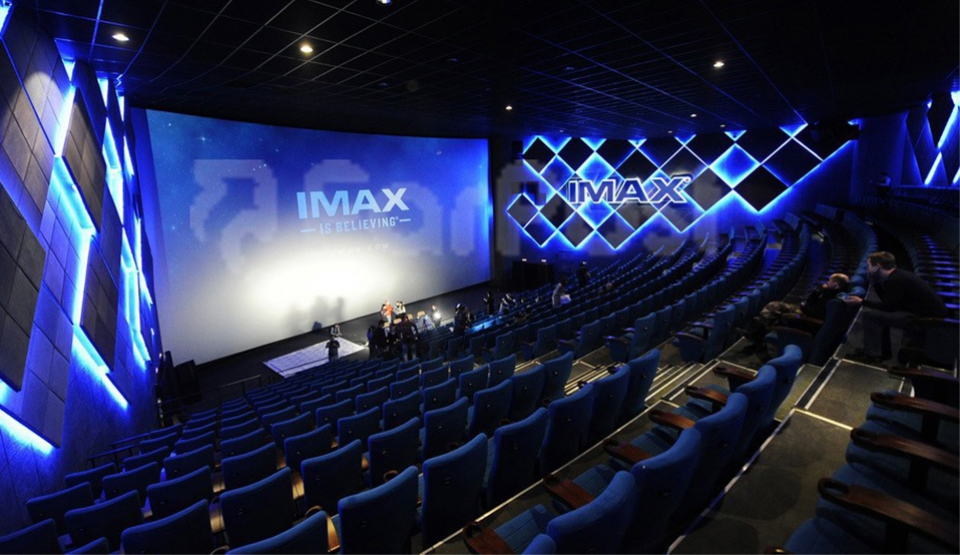 It’s not only the largest cinema in the Far East region of Russia, but also permanent court for film festivals such as like “Pacific Meridian”.

From the balcony of this monumental building you can get a spectacular seaviw at the Amur Bay. Inside the cinema, you will be able to find sushi bar and Singapore’s cuisine cafe

In the area of Seawall you will also be able to find Aquanarium «Aquaworld». In two exposition halls with a total area more than 1,5 square km you can see more than 120 breeds of marine animals, shells, fishes. You will be surprised with unique exhibits like a skull of Steller’s sea cow or fetus of albino sea otter. In 13 aquariums inhabitants of freshwater ponds and cold Japaneese and Ohotsk seas are represented. 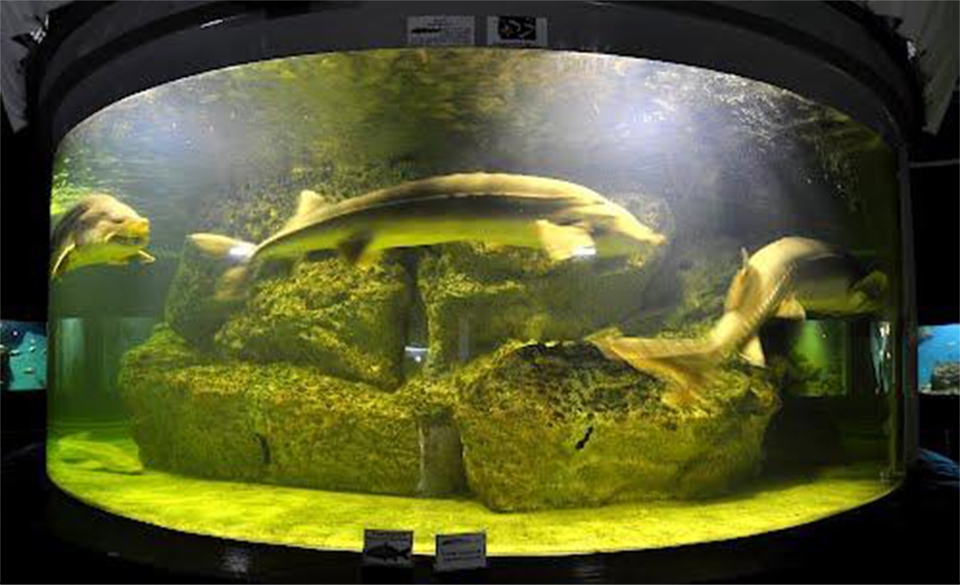 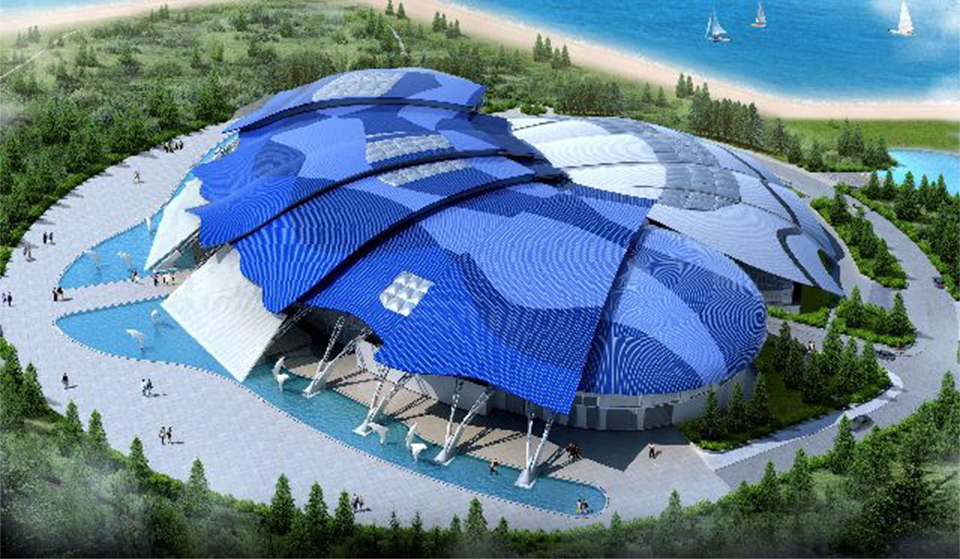 Would like to meet marine creatures more closely? We would recommend you to visit Russkiy island where you will be able to visit Primorsky aquarium. At first, you will be shocked by beauty of its architecture; main building has area more than 35000 sq meters, which looks like a shell. Secondly, by amount of water (25000 ton) where marine and freshwater creatures are living. Thirdly, while standing on a horizontal escalator, you will be able to enjoy the view of more than 500 different creatures brought to the aquarium from tropical and artic areas. In the end, you will be invited to visit the show of bottlenose dolphins, beluga whale, sea lions, and seals.

Our city is the host of the Far East.
On July 2nd 2015 Vladivostok turned 155 years old. Ofcourse Vladivostok is not that old as Moscow or Kazan wich were founded more than a thousands years ago. However, a lot of significant historical events happened to our city for that little amount of time.

Owing to this area, the famous politican of 19th century earl Nikolay Murav’ev got this double last name. 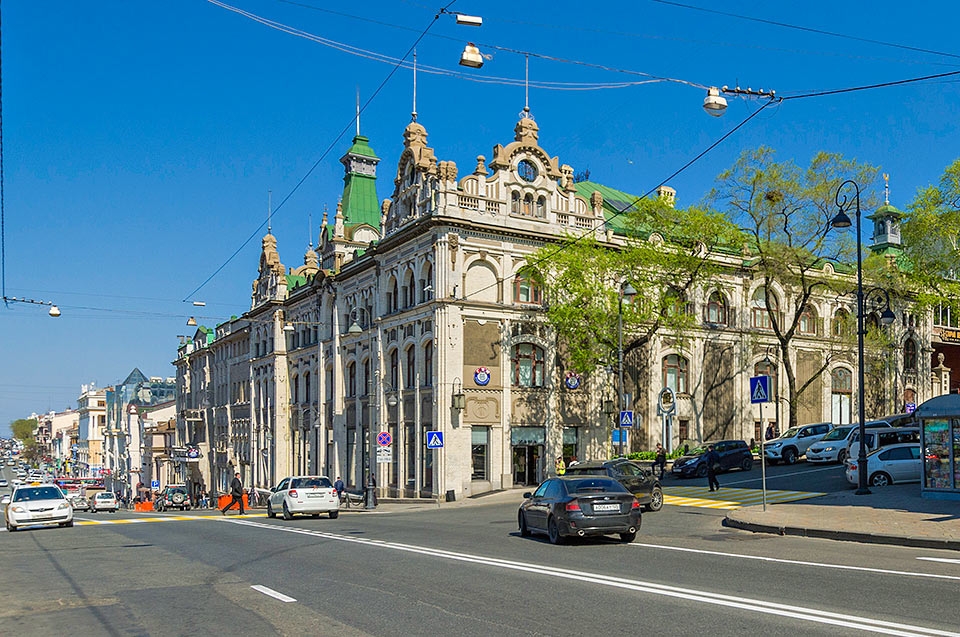 In 1858 the Treaty of Aigun was signed. That treaty established new borderline between Russian Empire and China right along Amur River. Afer that event The Emperior of Russia Alexander II granted the status of earl Amursky to Nikolay Murav’ev. Three years later our hero left Far East and lived in Paris until his death. In 1990 earl’s remains were transferred to Vladivostok. In 2012, the monument of earl Murav’ev-Amursky was builds in the park where his ashes dwell nowadays. The monument presents Nikolay Nikolaevich wearing dress-coat and holding the scroll of The Treaty of Aigun in his hand. However, earl Murav’ev-Amursky is much more recognizable thanks to another monument that can be seen at a 5000 rubles note.

Our city was founded at 1860. It’s exact time when the military supply ship Manchur, under Capitan Alexey K. Shefner, has found the outpost of Vladivostok. In 1862 Vladivostok became an official port. On April 28, 1880, Vladivostok was officially proclaimed a city. At that moment main Siberian military base has already been established there. Underwater cables have connected Vladivostok with Shanghai and Nagasaki.

At the beginning of 20th centrury Vladivostok has become military marine base and main port of Far East. Railway was completed and connected Vlasdivostok with Siberia and European parts. In 1917, at the time of revolution, times have become worse for city and citizens. In 1918 Japanese army has came and then USA, UK, France, Czech, Hungary, Canada and China has followed. White Army has to leave to Manila only in 1922 when Red Army took control over the city. A month after the Far Eastern Republic was former which became part of the RSFSR. In 1938 Primorsky region was added to the map with Vladivostok being its center.

The next main challenge Vladivstok faces was World War 2. In these days, its transportation lines have become very important for delivering cargo to the war front. After the war, city become the main military port which had its own pros and cons. Nikita Khruschev after visit to Vladivostok have made an order to make Vladivostok better than San Francisco. After that the urban development began: residential highrises, hospitals, clinics, kindergardens, cultural centers, funikuler, and main streets. However, this has created a main con for Vladivostok: foreigners were no longer allowed.

Tiger is continuously climbing up the hill..

Time has passed. The importance of the city becomes more well known abroad. In 1974 Leonid Breznev and Gerald Ford have met in Vladivostok to sign the agreement OSV-2. In 1992 City has become open for foreigners again. In 2012 Vladivostok hosts APEC summit. 36 new infrastructure pieces were build including new bridge across the Golden Horn Bay. Nowadays, fishing, science, culture and arts directions are continuously developing. Vladivostok has proven its coast of arms- tiger that is continuously climbing up the hill. Only forward, to new accomplishments!